I’ve been participating in “The Occult” since I was a teenager (Resume). I am going to walk you through a Time Line, of personal life experience (gnosis).

Age 15-19: Introduced to Paganism, and Wicca. The pagans I met were immoral, who claim “Paganism” as a religion for ego gratification, and power over others. I was then ‘let in’ to observe those we call “High Magickians”. In both Pagan and High Magick circles, I found ego, and manipulation, Especially Sexual. At age 16 I was seduced and molested by an older man, a high priest of Wicca. This “priest” ruled my life for about four years. My short time with “THE MANSON FAMILY”, I experienced, polyamory, psychic and egoic manipulation as well as deeply immoral behavior. Being raised in a CULT, the Jehovah’s Witnesses, trained me to accept Cult like treatment, and made me ripe, to be hunted by beasts.

By age 19, I was reading Tarot professionally among my peers. I worked in a night club as well as the local Psychic fair circuit. I had also worked my Will to rid myself of a Boogie man, shadow figure, who had been attacking me since I can remember (sleep paralysis). Wicca became my full time religion, the Tarot my livelihood. I was ALL IN.

I noticed a huge difference between Pagan/Wiccans and High Magi… running joke “How does a High Magickan screw in a light bulb?” ~ “They hold it up, and the World revolves around them.” Narcissism of Ego. The Magi were intellectual snobs, the pagans were poor sexual fiends. Both groups were serving Darkness, and dragging others further into the darkness.

I worked on my PERSONAL relationship with the Gods, my studies, and magickal work. My magick consisted of seasonal rituals of devotion, paying homage to Old pagan pantheons such as Egyptian, Greek and Etruscan. I communicated with my God family, and they Communicated back, a two way conversation. I was being RAISED BY GODS. Tarot as a livelihood, built my already keen counseling skills into Useful employment, in service to Other. I worked on myself, and my spiritual path as my lifestyle. I knew to be able to Help others, I would have to become very Healthy myself. I was fully dedicated, all IN. As life changed, I found myself living with two High Magickians, and more education ensued. Laws of Marduke, Sumeria + Babylon + Mayan, Worship of Aleister Crowley, Scarlet women, moon children, the Invokation of Demons with Spooky Pentagram floor drawings. At this point Every High Magi I knew, was Male… most Wiccan’s I knew were Female… so I broke it down into the sexes (a mistake). Men like power, females like nature (incorrect). Being independent Spiritually, I avoided the Darkness when dealing with “These People”, changing the topic to Metaphysical things, such as, Astrology.

So I had: New Agers, at the Psychic Fairs. High Magi as friends, I attended their open rituals and lectures. Pagans: My Pagan community sided with the older man who molested me, and I was ostracized. I never found anyone as dedicated as myself. Becoming the Hermit, in my studies was a natural progression, due to a very Sick Community.

In my early 20’s, I met my Reiki Master Teacher and became a Reiki Master Teacher myself. Through him, I met MY SPIRITUAL MOTHER, My GURU, Sri Mamua Devi. A royal blessing, to meet Guru in this Life. I was taught Buddhism, in the Karma Kagyu Lineage of the Tibetan. I dedicated to this path, 100%. Through meditation, self talk, mindfulness and LOVE, I grew by leaps and bounds! Nothing in Wicca had taught me how to Deal with my Monkey mind, my wild emotions, my EGO. Guru also laid the foundation for me to change my physical health. I had been ‘sickly’ my entire life, until Reiki and Guru began to intervene.

I am now in my Forties. The mysteries, I sought to Know and Master, have been learned. My Kundalini and rainbowlightbody, are intact and working.

I am Now a Mystic, Shaman, Guru.

I was BUILT to CREATE COMMUNITY. Part of my mission here on Earth is to ReWRITE the WRONG. Our most sacred spirituality has become a Toxic dump of Hungry Ghosts. Infiltration from Ancient Egypt to the Present, has created our current “Metaphysical” community. LIGHT HAS BECOME DARKNESS.

ABRAHAMIC: Uses the Invokation of Unclean Spirits (SOLOMON). Bloodline Curses started HERE (all teachings after this time, are Corrupted). Material gains, over your own Flesh and Blood. Child Sacrifice, actual or soul wise, either way the child is Cursed with the Demon, the Parent invoked. Sins of the Father In-DEED, and WORD. HIGH MAGICK CAME FROM ABRAHAMICS. Kabbalah. The three Major Religions are Abrahamic. A World in Darkness. False Light Teachings. Materialism + Working with the Dead + Demons. Cursing an entire bloodline, causing a Trapping of the Magi’s soul, in that Bloodline, always incarnating with the SAME family. When in Hungry Ghost form, these “ancestors” Rule over the living family bloodline. The goal of the ghost is to haunt and entrance the children into Acting out, the Ghosts will. Marriages are mostly arranged by Demonic ancestors, for Money and Power. When the unclean spirit ancestor reincarnates, the money and power continue to grow. Once you go Demonic, it’s almost impossible to go back to the light.
I’ll Take: ‘What Horror Movies are Based on’, for a Thousand Alex!

Demons: From the fourth dimensional realm negative ancestors, hungry ghosts, demons and aliens work against the awakening of humankind. I label this energy ‘dark consciousness’. This backsliding, negative cycle of motion is found in the traits of astrological Saturn. Old father Saturn, eater of children, teaches ‘growth through restriction’. In the Tarot both the Devil card (XV) and the Hierophant (V) express the importance of learning through obstacles, under dominion of an oppressive force.

Globally the distortion on the fourth dimension can be seen manifest as hierarchy of the patriarchy, denial of the universal laws/natural order, and enslavement of the masses to serve the few. This is the Ego aggrandizement that the biblical Satan is accused of acting upon. Claiming one’s own self as supreme over all others, including your soul’s architect. Once this belief in self eclipses belief in a higher power, the beast is born. The ego becomes the host of unclean thoughts, actions and feelings, dimming the light of the soul. Should this process continue, full ego mind is prone to possession from the spooky woo’s in the fourth dimension. Choosing the ego over unity leads to the ‘Satanic Death’ of loss of self identity.

“We were plac’d here by the Universal Brotherhood & Mercy. With powers fitted to circumscribe this dark Satanic death. And that the Seven Eyes of God may have space for Redemption” William Blake

Daemons: “Daemons are benevolent or benign nature spirits, beings of the same nature as both mortals and deities, similar to ghosts, chthonic heroes, spirit guides, forces of nature or the deities themselves.” Wikipedia

Originally from the Greek daemon is more commonly referred to as the higher self, holy guardian angel, over soul, Maslow’s self actualization, and the Buddha’s enlightenment.

The demonization of the daemon is most readily recognized in the rise of the Roman church. Priests became the dividers, the middlemen between humankind and divinity. Those who heard voices, had visions, created inventions, healed through nature, thought outside the accepted norm or prophesied were murdered en mass. The biggest ‘sinners’ usually had the most money to pay their way into heaven via the corrupt clergy.

THE USE OF BLOOD IN RITUAL, PRAYER, OR MAGICK IS STRICTLY FORBIDDEN!

Advice: Throughout our incarnations the proverbial angel on one shoulder and devil on the other has been true in a multidimensional sense. Free will gave us the experience to discern black from white, yin from yang and love from hate. Duality is the school of hard knocks. Through my own experiences I found, the more I chose good, light, love over lower darker vibrations such as manipulation, I simply felt better and grew in self respect. The more you choose in one direction, the more likely you are to follow on that path. Individual, isolated, seemingly unrelated choices compound into lifestyle.

This blog was Prompted by Modern High Magi, the AUTHORS of False Light. I wish to Differentiate myself, The Occult Priestess AND The Occult Mysteries from these Bumbling Neophytes of Darkness. Their work, is Devils play, which has NOTHING to do with the LIGHT of LOVE.

Dear Kali Yuga: Thank you for teaching me, what it’s like to live in an INVERTED reality. Where Up is Down, Wrong is Right, and Black tries to be White. I think HERMES said it best: 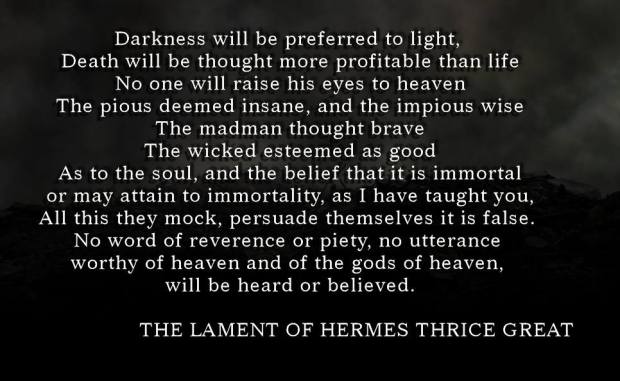 No Wonder people think the Occult is evil… Most of it IS, now a days. Do What Thou Wilt – MY ASS! If I disapprove of you, Imagine what HERMES, My Teacher Thinks of you!