Not the Hollywood Kind, not Exactly…

Since I was a kid, first exposed to Aliens, Greys and space monsters, I was over it already. I was not Impressed or scared by their wild theories! I had a real monster in my bedroom, sleep paralysis with a Shadowman. For me, sleep meant going straight to hell, the hungry ghost realm.

Around 2008 I became aware of a RESURGENCE of the 1960’s “STAR PEOPLE” under the new term “starseeds”. I began to listen to more and more youtubers talking about Starseeds, until I was actually wondering if I was one- Most of what they spoke of sounded Familiar.

Written in 2009 “Dakmara is telling me that magick made real is the Art of Knowing. She is my magickal side- Sirius Moon energy-Psychic. Her mask is Occult Priestess (Persona)”

When I asked Hermes, am I a StarSeed, I had no idea what I was in for. The answer was a resounding yes, but first I had to learn about how HERMES, ALTHOUGH A GREEK GOD OF EARTH, is also THE PRINCE OF SIRIUS B. And not only that, He and I were Married, making me the Princess under his Mothers Energy- for she is the Entire Oversoul of the Sirius Star System. Talk about a Royal Family. I knew I was not from my earth family! Even though genetically my body certainly came from my earth mother, yet I was born with my  past life face- so really my mother took after me.

At this time, I felt, if I am married to Hermes, maybe I should just stop being with Earth men all together. No one is going to compare with HERMES a GOD! I always said I wanted to marry a God, so what if he is invisible. I was about to Condemn myself to a Life with no Phallus, when- Hermes Indicated he had a Candidate, a body on earth, for me to marry. This also was very Unexpected news.

Yet As USUAL, everything made sense in a series of Memories, flooding into my visual cortex like a Truth Drug.

My books on Ancient Egyptians taught me, we are from SIRIUS. (my first ‘incarnation’ was Egyptian)

Hieros Gamos: Holy Marriage is the Goal of Alchemy, not just WITHIN, also WITHOUT, like I imagine Perfected Radha + Krishna archetypes. I have completed the Heiros Gamos Within, and got a Pear Heart (Fidelity) to show for it. The “Making it real” part, is about having a partner to explore the Duality of Masculine + Feminine powers of nature and beyond. #Sexy

Learning about my Starseed ROOTS, by no means covered in depth here, Oriented me to something else much more down to Earth. Archetypes I am “RELATED” too. I learned through Self Help + Jungian Psychology the Archetypes are also WITHIN. I say they are “A NATURALLY OCCURRING LABELING SYSTEM OF THE COLLECTIVE THOUGHT” aka stereotypes are usually true *wink* I began early identifying with and Labeling those of like mind, and character- understanding a Deep and Unknown SYMPATHY between us.

This Harmonic, Karmic. Resonance of “My KIND” in full color characters of stage, screen + media fiction drew what was Within me OUT OF HIDING. The more I saw myself reflected in our CULTure, the more I was able to see & understand who I was.

Understanding my BLOODLINE ANCESTORS were junkies of Ego, I cleaned up my Bloodline & Claimed Soul sovereignty.

IN DOING SO: I have “adopted” my TRIBE, who are my ARCHETYPAL STAR FAMILY representations on earth.

(She means she can see her Star Family Reflected on earth through These specific characters or Energy Rays.)

EGYPT, GREECE, AND THE AMERICAN GOTHIC

The firs time OTHER people equated me with a “Fictional Character” was LYDIA DEETZ from BEETLEJUICE. I was in the theater with my mother & sister. When Lydia haunted onto the screen, they both Turned to me in Unison and said “There’s Korinne!” I had been Diagnosed, as a LYDIA DEETZ, doomed to a HADES like MARRIAGE in a RED DRESS- AGAIN! Damn these humans with their repeating story lines. I did all that Back in Greece as Kore(Maiden)/Persephone(PhosphorousLight). I was also drawn to Lily in the film “LEGEND”, for that story is Persephone’s mythos as well.

What I did Not Understand until More Recently ~ Magenta the Maid(en) in Rocky Horror who I played for 5 solid years, was also what we term A STAR PERSON. That’s right, they were All from Transylvania Land of Night, and High Electric bills.

I first met ‘Grand Ma Ma’ on a kundalini journey, where I was desperate to find help, an adult of some sort to help us out of the deep trouble caused by raping and fracking/hacking our PRECIOUS earth and nature. Being the Daughter of Demeter, the Goddess of Earth & Season, I’ve always been a radio sensitive for earth frequency- I feel her pain (which used to be joy in other incarnations). I came to a LARGE WHITE staircase out in black space with white stars. I flung myself upon the stairs and looking up, I saw GRAND MA MA, in her proud black sparkling garments, looking down upon me. “Why are you here?” she asked, as if this was very odd. “My Earth is in trouble and I need Help!” Said like a true Olympian (Wonder Woman). Since this meeting I have learned Much more about the Oversoul of Sirius, and why Morticia actually fits her ROLE, dealing with Earth in the 20th/21st century. She told me, My Soul was Lost in a Game of Dolls- I had become Trapped in my own Design/Creation. This really blew my mind!

“A Most Trippy thing, Grand MA Sirius told me. “You’ve been lost, in your own game, of Dolls.” (Human Incarnation) ‘Grandma Sirius’ is the Oversoul of the Sirius Star System. She appears to my visionary eye as Morticia.” 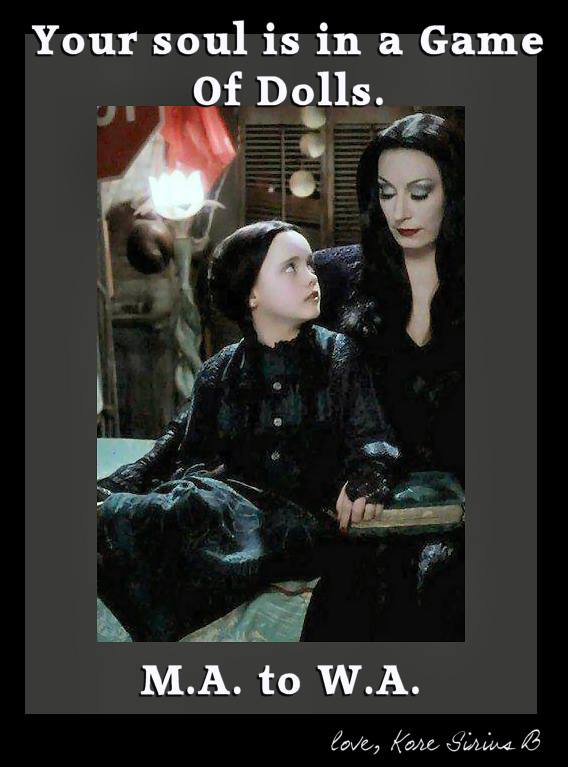 Another Kundalini awakening had me talking to the Moon from my porch- The Moon had taken the face & Personality of DAME EDNA (Character copied by Robin Williams for the Mrs. Doubt-Fire film)! SO that’s why we have GreenWitch Time, Edna is the Moon! I felt as if a Telephone cord was ‘Across the Pond’ and through Dames body I was making a phone call to my Sister the Moon. (Yes my Kundalini Awakenings are WITHOUT DRUGS, my DMT is Natural and spontaneous.) 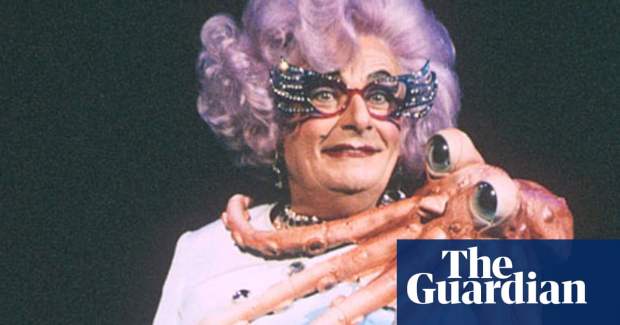 I have had so Many Kundalini adventures, I doubt all of them will see the light of day in writing or expression. Having Awakenings MAKES ONE AN ARTIST, by Natural Third Eye Birthright. Getting paid for it as a profession, is another story.

The reason I began this Blog is to Map Out my Archetypes and Art-A-typical Family Members. I shall USE THEM IN MY FICTION, as Joseph Campbell suggested- Hermes is all about RE-RIGHTing the NARRATIVE. They are both proud ‘Daddies’ of my spiritual progress and need for expression.

SIRIUS B, the Face of the TRUE spiritual Sun, as chanted in the Gaytria aka Heart Sutra.

Only Those on a Mission from God pass through the portals of Sirius B, to Earth. We are strict about who can join our parties, because we party for Centuries, for generations.

I will revisit and update blog. 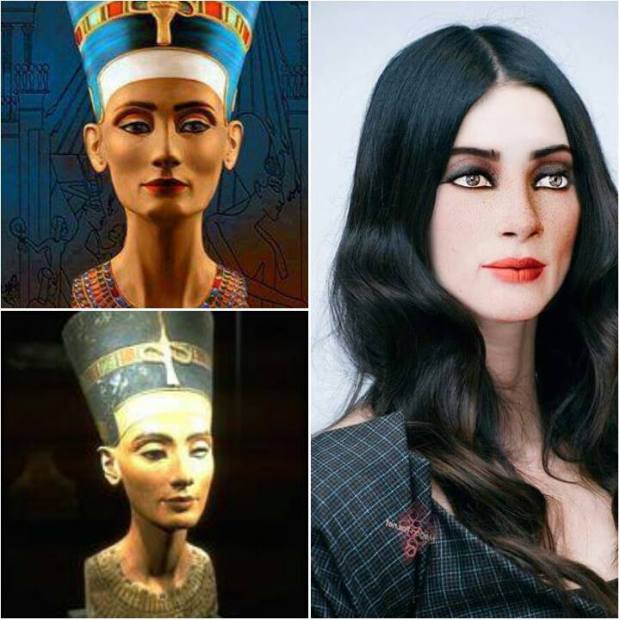 The Mina Doll: Many Characters played by Winona Ryder reflect my life story. Number one, Lydia Deetz: Myself, if I had weirdo rich New York parents. I began wearing black everyday when I turned fourteen. Other Mina Dolls~ Bram Stokers Dracula, HEATHERS Veronica (Tom) Sawyer. In a Kundalini Awakening, Grand Ma Ma said I was “Playing with my Mina Doll.” Divine children at play, on Earth as it is in Heaven.

My Beloved DEAD CROW: Brandon Bruce Lee, the soul I was ‘Intended’ to marry. Murdered, like his Character, like his Father (Sleep Paralysis ‘Curse’). Ancient Chinese secret… yes. (Shhh!)

Aunt Elvira: Yes I understand Elvira stole her Act from Vampira, the Original. However Elvira is a WITCH, and not a creature like that untrustworthy Vampire.

We claim both SIRIUS BLACK + SNAPE from the Harry Potter Universe.

Mork from Ork: An Uncle, who married young, to Judy Jetson, spending 2 solar years on ‘honeymoon’. He was then caught in a very odd timewarp cult, called ORSON. Mork was not from ORK, but was brainwashed as a Super Soldier and sent to spy on humans (his own children). We lost touch with Mork for many Moons, until MAGENTA PIXI and the 9 FORGOT TO RE-ROUT A CALL TO OCCULT PRIESTESS (due to a Sather oversight on their part). If the MOON had Not answered MORK, he would have been Abandoned on a desolate planet forever. However through yet ANOTHER kundalini awakening, WE saw the birth (portal alignment) that brought forth Planet Mercury Junior, and Mork finally had a docking station away from his dangerous cult master, the A.I. ORSON WELLS. Mork is now in SIRIUS PSYCHE ‘therapy’. #Recovery 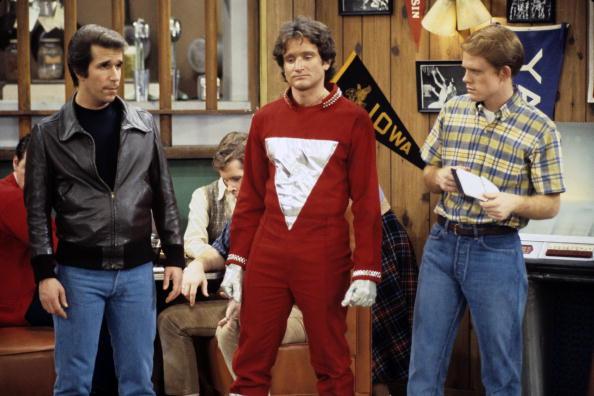 THE 9 AS A SOURCE FOR MANY STREET PSYCHICS: Read my blog; 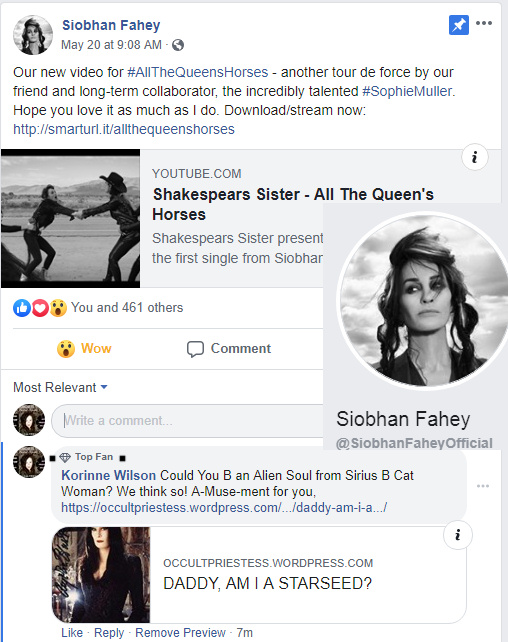 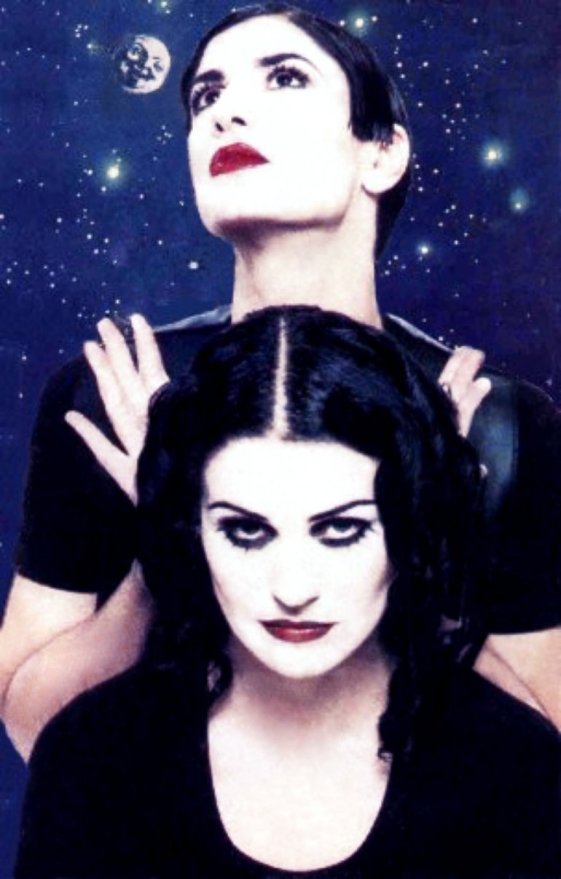 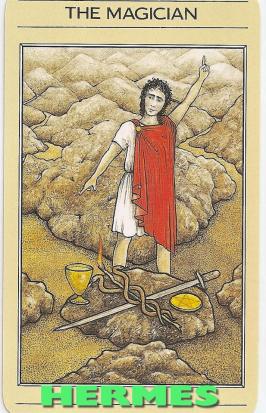 NOTES! To keep the Narrative Straight for future Videos and Artistic Xpression.