100% ancient Egyptian (Khem) Joke
there was loss of life, which isn’t funny…
However!
When we “Died” in Egypt (Ego death counts) We were Ushered into the Hall of Ma’at by Anubis (this happened to me) and your Heart is weighted on the Scales of Justice (Ma’at), weighting the heart against a feather. Be Your Heart Light as a Feather, you are then Immortal (eternal consciousness) ~ My heart surprisingly balanced with the feather (thank Isis!) and I “passed” ~
If you do Not Pass, you are eaten and Reincarnated without memory.

From Wikipedia, the free encyclopedia 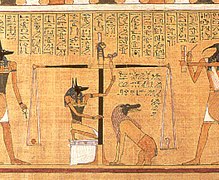 This detail scene from the Papyrusof Hunefer (ca. 1375 B.C.) showsHunefer‘s heart being weighed on the scale of Maat against the feather of truth, by the jackal-headed Anubis. Theibis-headed Thoth, scribe of the gods, records the result. If his heart is lighter than the feather, Hunefer is allowed to pass into the afterlife. If not, he is eaten by the waiting Ammit. Vignettes such as these were a common illustration inEgyptian books of the dead.[1]

Ammit (/ˈæmᵻt/; “devourer” or “soul-eater”; also spelled Ammut or Ahemait) was a female demon in ancient Egyptian religion with a body that was part lion,hippopotamus and crocodile—the three largest “man-eating” animals known to ancient Egyptians. A funerary deity, her titles included “Devourer of the Dead”, “Eater of Hearts“, and “Great of Death”.

Ammit lived near the scales of justice in Duat, the Egyptian underworld. In the Hall of Two Truths, Anubis weighed the heart of a person against the feather of Ma’at, the goddess of truth, which was depicted as an ostrich feather (the feather was often pictured in Ma’at’s headdress). If the heart was judged to be not pure, Ammit would devour it, and the person undergoing judgement was not allowed to continue their voyage towards Osiris and immortality. Once Ammit swallowed the heart, the soul was believed to become restless forever; this was called “to die a second time”. Ammit was also sometimes said to stand by a lake of fire. In some traditions, the unworthy hearts were cast into the fiery lake to be destroyed. Some scholars believe Ammit and the lake represent the same concept of destruction.

Ammit was not worshipped; instead she embodied all that the Egyptians feared, threatening to bind them to eternal restlessness if they did not follow the principle of Ma’at.

Ammit has been linked[who?] with the goddess Tawaret, who has a similar physical appearance and, as a companion of Bes, also protected others from evil. Other authors[who?] have noted that Ammit’s lion characteristics, and the lake of fire, may be pointers to a connection with the goddess Sekhmet. The relation to afterlife punishment and lake of fire location are also shared with the baboon deity Babi.