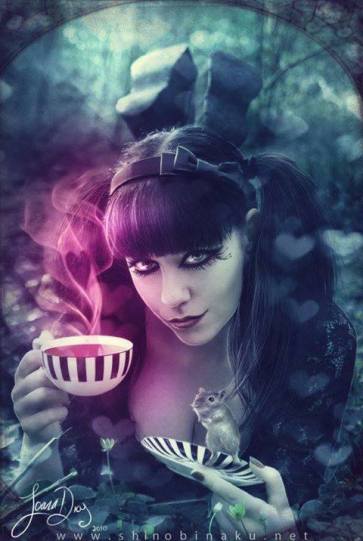 I saw Hermes, his face came close in my vision. Then like a Cheshire cat all I could see was his eyes and exaggerated smile. The features have the texture of x-rays, a negative image effect, made up of blue light.

Looking up the Cheshire cat as a symbol on the net I of course came across “Alice in Wonderland”. Then I remembered dancing to the song  “White Rabbit” last night at the club. While I was dancing to it I realized all the archetypal symbols in it. The Matrix then comes to mind-“feeling a bit like Alice tumbling down the rabbit hole?”.

“The Cheshire Cat best illustrates Bergson’s point. The obvious symbol of intellectual detachment, it wears the fixed grin of an amused observer. It can appear as only a head for it is representative of a disembodied intelligence. Alice maintains a similar detachment from her surroundings. She forms no strong or lasting relationships with any of the creatures or persons in Wonderland and Looking-Glass Land. Upon meeting the sorrowful Mock Turtle, Alice “pitied him deeply” and inquires, “What is his sorrow?” Any emotional bond here is quickly undermined by the Gryphon’s abrupt answer: “It’s all his fancy, that: he hasn’t got no sorrow, you know. Come on!”

The more I learn about the universe and how it works, the more fantastic it seems. 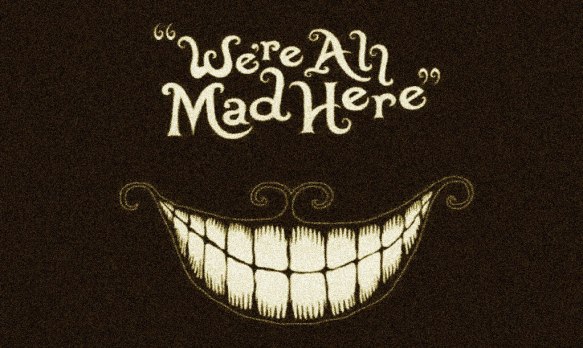 My journal entry ends there. I had no need to explain to myself what it meant, I found the meaning obvious. Now that I am sharing my journals I will take the time to narrate the more elusive concepts.

The quote makes a very good point with a possible double meaning:

Hermes as Cheshire is a disembodied intelligence, that is clear and simple to see. I must note that Hermes is very Funny and often sends symbols of comedy, jokes and laughter. On a personal note it is awkward laughing out loud in public because Hermes is joking with me in my head :)).

The other meaning of how Alice is detached and is being taught by the Cheshire to be detached. Alice feels for the suffering of another until the Cheshire tells her all those who suffer do it of their own choice, by their own will. After that Alice is not so concerned. I find it difficult to detach from the suffering of this world. One reason I am Buddhist, is because they call this world Samsara, world of suffering. I am drawn to heal suffering, thus causing my own suffering  in the process. I imagine Hermes would like me to learn more about compassion without suffering.

Did Hermes answer my specific question with the visuals and web page quote? Well… sometimes Hermes is straight forward with meaning, at other times he gives me an answer I could only figure out the meaning to in the future. When I look back at writings I notice sometimes I have to evolve to a higher state of awareness in order to truly understand first what I am really asking and second what the answer really is. Therefor no matter what I ask I will get an answer, yet that answer is sometimes based in the future.

You will see through the following sessions with Hermes, I was in the beginning stages of my first Kundalini Awakening. Alice as a metaphor was perfect for my current life situation.